IRFC is primarily engaged in financing the acquisition of rolling stock assets (providing solutions and associated services in regards to maintenance and utilization of railway assets and Infrastructure), leasing of railway infrastructure assets, and lending to entities under the Ministry of Railways (MOR), and such others.

Being the borrowing arm of Indian Railways, IRFC is responsible to raise funds for the Ministry of Railways that is required to procure rolling stock assets (such as wagons, trucks, electric multiple units, locomotives, coaches), its improvement, expansion, and assets management.

Over the last three decades, the company has played a significant role in supporting the capacity enhancement of the Indian Railways by financing a proportion of its annual plan outlay. 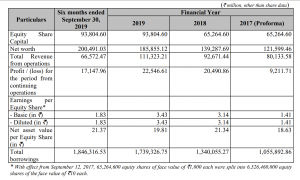 Tax liability of Rs.2,653.76 crore along with Interest & Penalty is seen. The same is not demanded by the concerned authority for varied reasons. And, the Company is not liable to pay the tax. However, if any liability arises that would be recoverable from the Ministry of Railways, India.

The disputed demand of tax including interest thereon amounted to Rs.94.8 lakh.

How IRFC issues and subscribes for Bond: 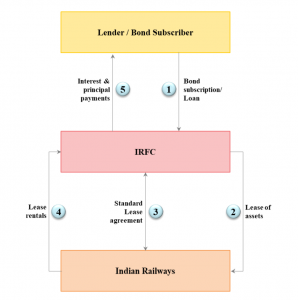 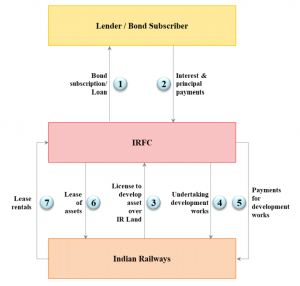 As per the CPSE Capital Restructuring Guidelines, all central public sector enterprises are required to pay a minimum annual dividend of 30.00% of profit after tax or 5.00% of the net worth, whichever is higher. Since the company (IRFC) is or will be generating sufficient profit (expected). Investors can expect a good dividend over their investment.

IRFC has been awarded a rather comfortable credit rating score as follows.

Note: Any downgrade in the given credit ratings or India’s debt rating could increase IRFC’s finance costs and adversely affect their ability to borrow funds and the business, results of operations, financial condition, and cash flows.

The management of IRFC’s know about the concentrated business portfolio. And, has made efforts in diversifying the same. The management has diversified its borrowing portfolio through a range of financing instruments and identifying new markets and investors, including through the issuance of ‘green bonds’ and ‘medium-term notes’.

Management governance and Business Ethics are not affected. And, the same can be validated via the companies financial performance and credit scores.

A touch of IT and the advancement of technology is always appreciated. Something the management has to concentrate more hereon.

Use of IPO proceeds:

IPO proceeds shall be utilized for the following reasons; 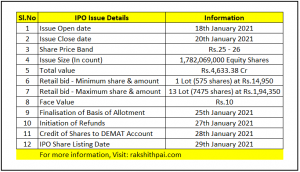 The company has to acquire assets and lease them to the Railways. IRFC also gets the benefit of depreciation of the assets. This is a risk-free business model since all the lease receivables from the Ministry of Railways are factored in the Union Budget. The lease rentals are also earmarked in the Budget ensuring steady revenue to IRFC.

Thus, the company had “zero” NPA since its incorporation in 1986 and all its advances are 100% risk-free for the same is given to Indian Railways. This is the reason, the company has shown consistent profit year-after-year.

But, being too much dependent on one entity (IRCTC) puts the company IRFC in a precarious situation.

Since major or, almost all of IRFC’s revenue is factored in due to its business with IRCTC. Any shortcomings with the Railway business and the companies (IRFC) financials will take a hit.

Although the growth for the Railways is just yet to start, India as a country is growing at a rapid rate. This gives a high demand for a proper transportation network. Something Indian Railways can fill in easily. With demand comes competition. In this case, competition from private players.

In 2020, to cut short the railways business loss and make it into a profitable entity. The Indian government has rolled out an initiative with which private players get to invest around Rs.30,000 crore into the railway system through rolling stock and other expenditures.

The government has identified 109 busy routes across India to run 151 private trains for 35 years. Although this amounts to just 5% of total trains in India. This is just the beginning and what comes next is more privatization.

Now, the question is, will the privatized trains take IRFC’s assistance in maintaining the assets? What if that part of the business is also privatized or managed by a different entity? Because, Lease income, interest on loans, and pre-commencement lease interest income together represented 99.81% and 99.64% of IRFC’s 2019 total revenue from the operation.

IRFC is completely dependent on the Indian Railway sector (mainly IRCTC) growth. which makes it susceptible to the GoI initiatives to modernize the railways and other policies and any slowdown in the growth of Indian Railways will impact IRFC’s business and results of operations.

More importantly, will the “Public-Private Partnership” work in the case of Indian Railways? And, if it does. Will the same be beneficial to IRFC? Only time can answer these questions.

IRCTC is India’s largest railway network in the world and the only Railway company in India. So, the company has got a clear monopoly aka “natural monopoly”. It employs over 12 lakh Indians. And, since IRFC solely works for IRCTC. As long as IRCTC maintains its monopoly and market position. The company’s (IRFC) financial position will not be affected.

IRFC has a unique business model and relies heavily on Indian Railways for profits. As long as the agreement between IRFC and the Ministry of Railways (MoR) keeps renewing, the company runs a risk-free business despite having high long-term debt amounting to Rs.1,84,631.65 crores.

Since covid, All the economists and institutions around the world have seen India’s capabilities for future growth. This comes with further infrastructural investments. Infrastructure such as transportation facilities in regards to connecting every corner of the nation is of utmost importance.

Thus, the demand for Railways is ever existing. This expansion in infrastructure will demand more assistance from the Indian Railway Finance Corporation (IRFC). However, if the Government of India (GoI) or Ministry of Railways (MoR) changes its policies regarding IRFC, then its profitability can get affected.

Finally, If the GOI is in fact serious about disinvesting the Railway business, and Indian Railway is the major if not only business operation handled by IRFC. Due to disinvestment, the comfortable cash and investment position of the business will be affected.

This could further affect the credit ratings and thus, can make the borrowings costly. There’s also some Railway union’s disagreement about privatization. But, without privatization. Can the industry completely rely on the government and such institutions for funding and can they come up with an operational competitive advantage?

Although, the Government of Indian owns a significant stake in the company. Over the years, the same is said to be disinvested. This holdings sale will come with lesser support from GOI & MOR.

To be self-sufficient should be the main goal of the company. If in near future, IRFC can achieve this by its own operational source whilst diversifying its portfolio with other business (anything other than Indian Railways). Only then, the company can be Investment worthy.

How to apply for Indian Railway Finance Corporation – IPO?

Steps to be followed to apply for “IRFC IPO” via Zerodha console:

Step 1: Visit the Zerodha website and login to Console.

Step 2: Go to Portfolio and click the IPOs link.

Step 4: Enter your UPI ID, Quantity (In lots), and Price.

Step 6: Visit the UPI App (net banking or BHIM) to approve the mandate.

Do not have a brokerage account? Apply for Zerodha – India’s top brokerage service.

6 thoughts on “Indian Railway Finance Corporation IPO. Is it worth Subscribing?”