Why wealth is important?

So, how to get this financial freedom?

To attain the required wealth and be financially independent, one has to have multiple sources of income. We should invest in various revenue-generating assets. Few are mentioned below;

What is debt? Debt is something we owe to others. It’s an asset to your creditor. A debt that we use to generate assets is termed as good debt. For they not only provide proper circulation of money but also with optimum utilization of the same as leverage can make your task easily achievable.
Throughout the period of creating debt to the utilization of them and the same going bad. We are creating a cycle of money circulation where the money transfers from one to another. But, those bad debts that accumulate will one day have negative repercussions on the economy. Yup, that day is here! 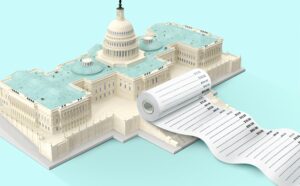 There are two types of debt cycles. The short term (lasts a decade) & the long term (lasts over half a century). With debt, comes with the spendings & the consumption thus creating demand to keep the economy running. When you have more debt, one which is unserviceable by the income you generate. It becomes bad debt and you are in a position of indebtedness.

Fortunately or unfortunately, the current paradigm shift we ought to see in the coming days seem more of both short term & long term debt cycles. And that’s scary! It has the capacity to entirely disrupt the current US dollar-based monetary system. 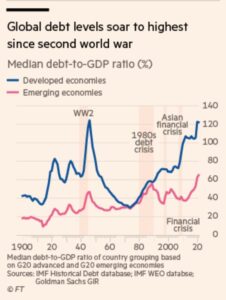 When we speak about debt, it’s either personal debt or corporate level debt or one where the government takes up to maintain the economy. Yes, the one we are about to see go bad. Countries such as the USA, China, Japan, South Korea, and the EU countries are highly indebted in terms of internal or external debt at such rates never seen before. In fact, the only previous time we had seen such huge debt comparative to the GDP was at the time of WW2.

Failure of the Fiat system!

Central banks throughout the period have created or let’s say made available plenty of liquidity out of thin air and pumped the same into the economy leading to easy availability and on the other side with less productivity making all the printed currency literally worthless. The dollar has lost over 97 percent of its purchasing power due to inflation or otherwise between 1965 to today. Check out my article for more info on our failed Monetary system.

When all this nuisance makes a wave at some point, for it surely will. It’s those middle class and the poor to suffer more. The money saved (if we have anything left) will be termed worthless! for it affects the purchasing power. The only option to overcome this issue is to not hold on to cash but rather invest the same into various assets.

The fire within us to achieve financial independence led to coining the word “ The FIRE movement”. Fire stands for Financial Independence, Retire Early. It is an ideology designed by Vicki Robin and Jon Dominguez in their book “Your Money or Your Life” published in 1992. The movement actually took its reach by the “Millennials”. Millennials are also known as ‘Generation Y’, are those born in the period 1981 – 1996. They were at the heart of the tech revolution & grew up in such a dynamic world.

The changes that technology has got into us is more dynamic than anything we had ever seen in over a century. With such a dynamic world came the false sense of wealth creation at one’s imagination. Yes, the imagination that led to the dot-com bubble that burst in 2000. Liquidity was immensely available for every individual at his/her disposal. This false sense of wealth created a wrong sense of individual riches that entirely vanished post-dot-com crash. 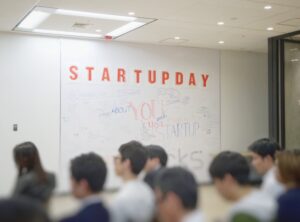 With that being said, the generation that’ll lead us going forward (Generation Z)  isn’t your ‘everyday joe’. This new generation is extremely ambitious and contagiously hyper optimistic. They see wealth creation as if it’s easily achievable. When you see the top 1% of the population. And information about one getting rich by launching his/her startup and the way it is portrayed to the young generation as if it’s easily achievable.

The population is contagiously attracted to the high-five lifestyle with very little to lose. And at a slight chance of happening of recession. Everyone will be left out to hunt for a living. A truly disastrous situation it is.

Here’s my theory on how to begin with. Though what I got to say might not be anything you had thought of to be so simple. Well, it is simple…

My principle of wealth creation is based on this theory called “SIR – Save, Invest and Repeat”.

Unfortunately, we Indians aren’t great at saving. India’s gross savings rate is just over 30%. So, wanna create wealth? Start with saving. Save as much as possible. Whenever & wherever possible your income should at its maximum rate contribute to your savings. Most of the countries analyze their GDP based on consumption. Which doesn’t make any sense? The USA boasts that over 70% of their GDP contribution is by consumer spending. Spending doesn’t generate wealth! It’s the saving that’s needed.

Just savings doesn’t create wealth. In fact, each rupee saved in a bank is a rupee wasted for inflation at over 4% every year eats away more than your income of interest over savings which is at 3 – 3.5%. An emergency savings account is absolutely suggested. But, most of your savings should go to Investment. Hence the first two letters of my theory stand for Savings & Investment.

Now, the letter ‘R’. It is the most important one. ‘R’ stands for a repeat. Repeat the process of saving & investing over and over until you reach your required wealth. Yes, I agree the theory isn’t much. In fact, it’s known to everyone but, how many of you follow it? You may do one or two of the mentioned steps but, not all. And, if you are doing all three already. Then, keep doing the same. 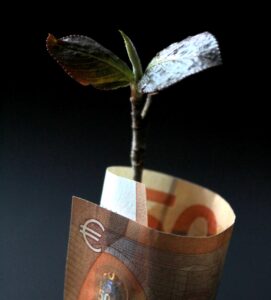 Save most of your income and invest the same in a well-diversified portfolio, appropriately allocate among various asset classes. Do this in a disciplined manner over a couple of years to achieve your desired wealth.